Posted on May 26, 2017 Categories: Awards, News Releases Comments are off for this post 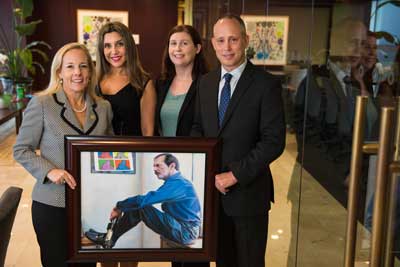 Pro bono attorneys Jamie Billotte Moses, left, and Tom Young, right, represented a little boy named Lucas in oral argument before the Fifth District Court of Appeal after pro bono attorney John Hamilton, whose portrait they are holding, became too sick to appear in court on his behalf. Viviane Acarie, second from left, was able to adopt her nephew Lucas thanks to the efforts of the pro bono attorneys and Guardian Ad Litem Attorney Kate York of the Legal Aid Society of the Orange County Bar Association, second from right.

MAITLAND, Fla. – The Legal Aid Society of the Orange County Bar Association has been selected to receive The Florida Bar Foundation’s Paul Doyle Children’s Advocacy Award for its work on a case that was instrumental in winning passage of the Child’s Best Hope Act, a new law that allows Florida judges to apply the child’s best interest standard in decisions about adoption intervention.

Guardian Ad Litem Attorney Kate York of the legal aid society and several Orlando pro bono attorneys, including Jamie Billotte Moses, Tom Young, Christopher Carlyle, and the late John Hamilton, each played a role in representing a boy named Lucas, who was 2 when his father murdered his mother in front of him. A frequent and longtime volunteer for the Legal Aid Society, Hamilton was in the end stages of lung cancer when representing the child pro bono and had to call on others for help in two separate appeals.

Lucas’ father had sought to have his own mother adopt the child, who had been living with his maternal aunt since the murder and scarcely knew his paternal grandmother. The aunt, who’d had a close relationship with Lucas since he was born, wanted him to remain with her and her family, which included a female cousin about his age with whom he had bonded.

At the time, Florida law considered “best interest” differently in family law and dependency cases, and it was unclear whether the best interest standard applied and whether it trumped the father’s parental rights.

The egregiousness of the situation made a strong case to support the efforts of the Statewide Guardian Ad Litem Office, which had been working with the Florida Legislature to clarify the consideration courts must give to the best interests of the child under the statute.

Legislators heard the message loud and clear, and in March 2016 the Child’s Best Hope Act was signed into law. Under the new law, dependency judges can weigh factors including the permanency offered, caregiver bonds, the stability of the adoptive home, the child’s preference when it can be reasonably determined, and what is best for the child.

“Now it’s very clear that courts can consider the child’s best interest in determining whether to permit intervention and adoption at the parent’s direction,” Young said.

The Paul Doyle Children’s Advocacy Award, which is sponsored by Shutts & Bowen, will be presented June 22 at The Florida Bar Foundation’s 41st Annual Reception & Dinner at the Boca Raton Resort and Club during The Florida Bar Annual Convention. Tickets are available at www.TheFloridaBarFoundation.org/tickets.