Posted on August 2, 2017 Categories: Fall 2017, Other News, Speaking of Justice Comments are off for this post 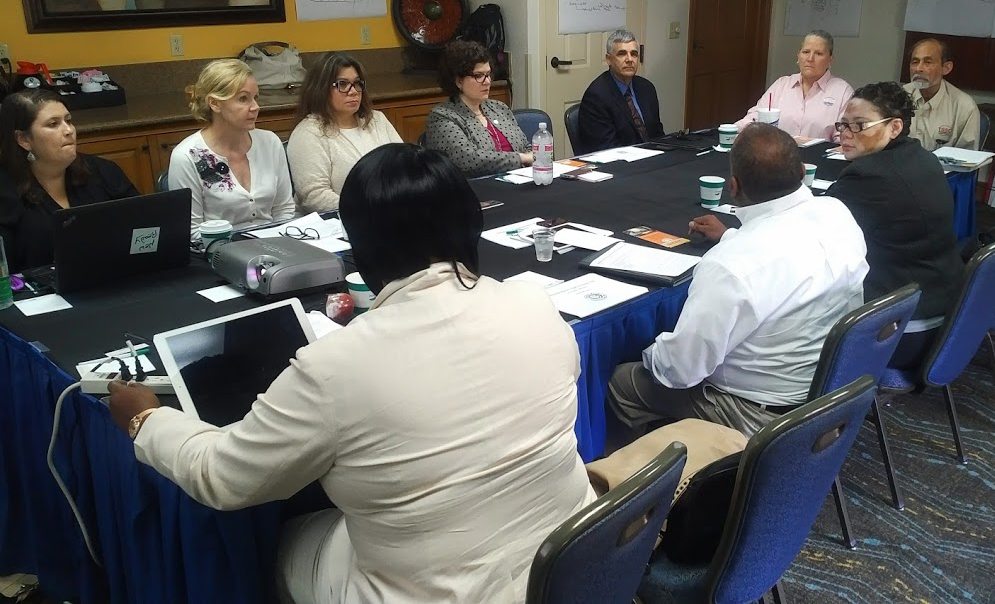 Staff from The Florida Bar Foundation, Florida Rural Legal Services and the Toyota Production System Support Center met to review the results of the center’s work with FRLS to improve its business processes involving client intake and customer service.

At first blush, the industrial challenge of manufacturing automobiles might seem as far from the service-driven job of providing legal aid as launching a rocket is from frosting a cake.

And yet on a sunny morning in April of 2016, Toyota advisor Lance A. Lewis sat by the reception desk in the Fort Myers office of Florida Rural Legal Services (FRLS), notebook and pen in hand, scrutinizing workflow with the same intensity that he applies to the Toyota factory supply chain. As the receptionist worked, he tracked walk-in visits and hotline calls. He counted steps from desk to door, and watched case transfers.

“I observed how much time was spent on actual value-added activity,” Lewis explained, “and how much was not value-added.”

He was employing the same “go and see” process he might have used to observe factory workers unloading axels at one of Toyota’s assembly plants. This time, the goal was helping improve efficiency and productivity in the service of people in need of civil legal help. As it happened, The Toyota Way had quite a lot to offer a legal aid office, said Amy Burns, deputy director of Florida Rural Legal Services, which serves low-income clients in a service area stretching from Ft. Myers to West Palm Beach and north to Lakeland.

“Instead of coming in like robots and doing things the same way they have always been done, you start asking, ‘Why am I doing this? Is this helping?'” Burns said.

For 25 years Toyota North America’s not-for-profit affiliate, the Toyota Production System Support Center (TSSC), has shared the automaker’s manufacturing know-how with organizations that have nothing to do with manufacturing cars. Legal aid was an area TSSC hadn’t served previously.

The partnership was the idea of Melissa Moss, deputy director for strategic initiatives at The Florida Bar Foundation. After seeing the value of process improvement in other organizations, she believed kaizen — a constant improvement mindset — could help civil legal aid thrive following a prolonged period of growing demand and shrinking resources.

“The bottom line is, it’s a game-changer,” Moss said.

Florida Rural Legal Services, a Foundation grantee, seemed the best place to pilot Toyota’s process improvement strategies because of the important safety-net role it plays in 13 South Central Florida counties, she said. Burns added that Florida Rural had recently been awarded a federal Legal Services Corporation Technology Initiative Grant to centralize their intake and install a new digital call center and phone system, so it was an ideal time to re-examine its workflow and procedures.

When Moss and Florida Rural Legal Services reached out to TSSC, Lewis said the team paused to weigh whether they could actually bring value to legal work. In the end, they concluded, effective customer service is a critical element of both legal aid and the Toyota Way. But would their system be embraced? After meeting with Burns and Florida Rural’s executive director, Donald Isaac, and seeing the management team’s enthusiasm for digging in and improving the organization, it was a go, he said.

“This cannot happen if senior management does not buy into it and get committed to it,” Lewis said. “Toyota is looking for ways to make problems visible. In many companies, bosses don’t want to hear about problems.”

Managers wanted to explore whether they could shorten lag time between a potential client’s first contact and their first conversation with a legal expert. People who called or walked in to one of FRLS’ offices — in Belle Glade, West Palm Beach, Lakeland, Punta Gorda, Fort Pierce or Fort Myers — sometimes waited a week or more between their initial call, appointment with an eligibility screener and chat with an advocate, Burns said. It varied from office to office.

“It would take maybe five days from receptionist to screener, and from screener to legal advocate, maybe another 48 hours,” she said. That wasn’t satisfactory. Just hiring more people wasn’t the answer. Solving this problem would require more thought.

When Lewis arrived, he didn’t dive right in to quick fixes. Instead, his first order of business was to lead a group discussion of the Toyota Way, the company’s philosophy of putting the customer first in every situation, treating employees as a company’s greatest asset, and creating a culture of constant improvement.

Having efficient and standardized processes is one way of respecting employees, whose time on earth is limited and precious, he explained.

“Non-value-added work not only adds to lead time, but more importantly, it doesn’t respect employees’ humanity. That is a deeply cultural thing at Toyota,” Lewis said.

On day two, they began deploying the tools of Toyota process improvement. Area managers pulled out notepads and markers, and began mapping out the customer’s journey, breaking it down into smaller and smaller steps. They learned that every office had different strengths, workloads, different processes.

“We have four main offices and satellite offices. From the beginning of time, each individual office had its own screener who would take the calls and open a file if they qualified. There was a lack of standardization. Some offices focused on housing primarily, while other offices focused on family law due to local grants. We had some offices that were overbooked, some that had openings,” Burns said.

As they drew lines and arrows on the easel pads, they realized that some of their steps might be adding busywork, but not really serving the clients’ needs. A standardized, efficient process would serve everyone better.

The most important tasks, the ones that served the customer, were fairly simple:

“The first question is, ‘Does that client meet their criteria?’ If so, the next step is for that client to meet the advocate. Everything else in between is not value-added,” Lewis said.

It was time to “go and see,” to observe, without bias or assumptions, how the existing intake process worked for clients and employees. Lewis said he made many observations.

“I observed that the receptionist was tied to the phone. But she also had to open the locked door if someone wanted to come in. She would have to tell the person to wait a minute, put the phone down, walk down the hall and open the door,” Lewis said.

The door needed to stay locked for security reasons. In that case, he suggested the receptionist use a wireless headset, so that she could get up and open the door without interrupting the flow of her call with her customer. She does now.

“You have to really take the time to go and see the area, get information, break it down and break it down some more, and then say, ‘OK these are what my problems are and these are my counter measures so it never happens again,’ Burns said.”

If the Toyota Way required detailed, deliberate consideration of a problem’s cause, it also involved deploying solutions quickly. Headsets for receptionists? Done. Next issue.

The new phone system allowed for the centralization of calls. But that was just the beginning. Clients wanted to speak with an attorney on the day they made contact. Why wasn’t that happening?

First, they needed to be screened to see if they met the eligibility criteria for legal aid services. That was one holdup — a process to standardize. Then, a consultation with a legal advocate could be scheduled. But some advocates had expertise in housing, some in family law, Burns said. Area managers had concerns about asking a landlord-tenant expert to discuss a child support payment problem. Even if they couldn’t answer all questions, couldn’t adding a rotating attorney-of-the-day to field emergency calls help some of the cases get addressed quickly? Testing out the proposals made sense.

Eligibility appointments were centralized, and then the attorney of the day was added. The results were immediately successful.

“We have already increased our intakes and the amount of people we are closing by 30 percent just in the first quarter this year, and that is going to improve even more,” Burns said.

Also, the lag time from a client’s first contact to an attorney chat has shrunk to under 48 hours, Burns said.

Moss said she’s not surprised at the positive, quick results. “It’s one of the most important things we have done,” she said.

Going forward, Burns said Florida Rural Legal Services will retain the continuous improvement mindset, to move clients to answers even more quickly, so that even more people can be served.

“What we learned from Toyota about creating the right culture in an organization, and how to look at problems not in a negative way, but as opportunities for improvement, and to keep the customer’s experience at the forefront of everything we do? That is the difference between a good organization and a great organization,” Burns said. “If we keep this up I cannot imagine where we will be in a couple of years.”

Harkness receives Medal of Honor Award for a Lawyer 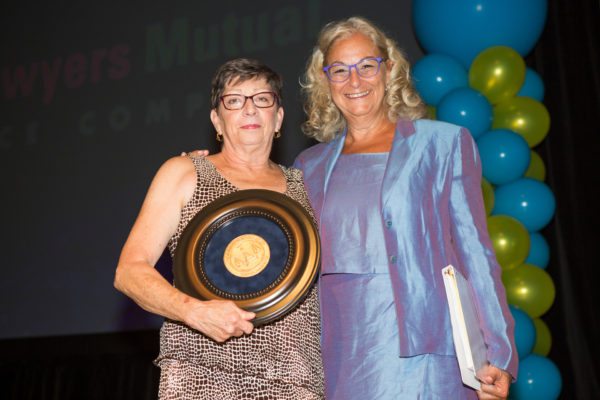 Jane Curran receives Medal of Honor Award for a Non-Lawyer 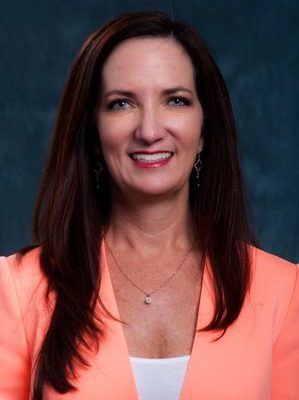 Message from the President – Fall 2017