Posted on January 1, 2010 Categories: Speaking of Justice, Stories of Justice Comments are off for this post

Florida Legal Services Executive Director Kent Spuhler presents a statute of Lady Justice to Paul Doyle. On the base are inscribed the names of those who contributed to the Building Justice capital campaign in honor of Doyle, for whom the new FLS headquarters is named.

When it came to naming the new home of Florida Legal Services, only one person would fit the bill, said FLS Executive Director Kent Spuhler.

“There was only one name that could go on the state capital justice center,” said Spuhler at the Dec. 10 unveiling of the Paul Doyle Justice Center in Tallahassee. “That’s the name of the man who has devoted 40 years of his professional career to the oppressed and those who weren’t able to get a fair deal out of our legal system.”

For 35 years, FLS has been the voice for Florida’s poor and disadvantaged. Over the years, its role has grown, both in the courtroom and in the Capitol, but its attorneys and staff were still working in cramped, rented basement offices. The need became apparent for a larger, permanent space with more room for statewide training programs, as well as workspace for legal services staff visiting the capital. As a way of honoring Doyle and helping FLS purchase a more suitable building, 175 donors contributed more than $625,000 through the FLS Building Justice capital campaign.

About 150 of Doyle’s colleagues, family and friends traveled from as far as Portland, Ore., to attend the dedication of the new FLS headquarters.

“[Doyle] has served in many roles, but in all those roles he has been a leader, an encourager and a person that says we can never be satisfied,” Spuhler said. “There’s more to do, there is more we can do, no matter if the money’s up or the money’s down. The job is in front of you and the job is making a difference.”

Doyle’s commitment to legal services began in the 1970s when he served as executive director of Jacksonville Area Legal Aid.

For 18 years, Doyle has served as the director of The Florida Bar Foundation’s Legal Assistance for the Poor and Law Student Assistance grant programs, working to fund legal aid organizations in Florida and to foster a love of public service among tomorrow’s lawyers.

“I get a chance to travel all over the country and tell people what Paul has told me to say, and I get such recognition for it, but it’s all Paul,” Curran said.

In accepting the honor, Doyle said the most important word in the building’s name is “justice.”

“For the poor, justice is not vague or dispassionate, general justice for all, but a living, ambitious, sometimes controversial and dedicated quest…We owe the FLS staff and the staff of legal aid programs throughout Florida our support, respect and enduring debt of gratitude for the shouldering of this challenge… I’m humbled to have my name on this building and look forward to supporting FLS in the future.” 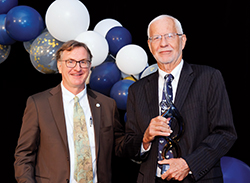