Posted on October 27, 2017 Categories: News Releases, Pro Bono Comments are off for this post 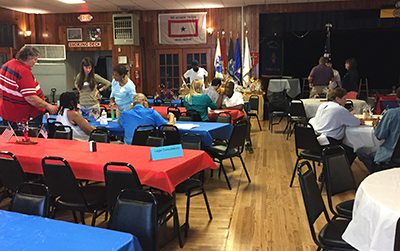 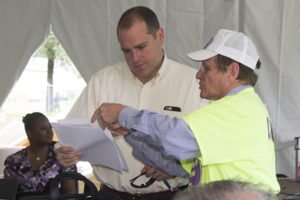 State Attorney Jack Campbell from the Second Circuit has helped plan Stand Down Courts since April 2013 with Legal Program coordinator and TVLC founder Dan Hendrickson, who has worked thousands of pro bono hours since retiring from public defender work.

Though U.S. military veteran Jeff McCary found himself unable to work because of an injury, he continued to pay his child support as long as he could.

Although McCary received rent assistance from Family Endeavors and Florida Veterans Foundation, he eventually exhausted his savings. A motion for contempt was filed for the child support he could no longer pay.

The Department of Housing and Urban Development estimates that more than 39,000 U.S. veterans are homeless, according to a 2016 report. And like McCary, many more are just an illness or paycheck away from becoming homeless.

But McCary had somewhere to turn for help.

The Tallahassee Veterans Legal Collaborative (TVLC) has assisted hundreds of veterans like McCary since its inception in January. TVLC is a collaboration of groups and pro bono attorneys who work to provide civil legal aid to at-risk veterans.

While indigent veterans have representation by public defenders in criminal law matters, and effective diversion opportunities through the Veterans Treatment Court, there is a gap in services for those who cannot afford civil legal aid.

For years, the Florida Veterans Foundation has held the North Florida Homeless and At-Risk Stand Down, an event that provides legal services and a civil court for veterans, primarily to assist with driver’s license reinstatement. But those veterans frequently had other legal needs, and the event only takes place once a year.

The foundation and several groups realized that a collaborative effort could support more veterans year-round. In January, Tallahassee attorney Dan Hendrickson formed the TVLC, which then trained 24 Florida State University law students how to assist veterans with driver’s license reinstatement and other issues. 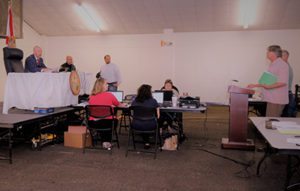 “Veterans are telling their stories, facing old problems and mistakes from all over the country, and helping each other in recovery, or getting jobs,” said Hendrickson, who also coordinated the legal program for the North Florida Homeless Veterans Stand Down.

“Some are now even looking at possible careers in the law, if not law school, including courses to become Veteran Peer specialists. The inspiration from this pro bono work, now in its fifth year, has meant so much to hundreds of families in the capital region.”

At the 2017 Stand Down in April, 50 TVLC volunteers gave free consultations to more than 100 veterans. A second Stand Down court was held in June with Leon County Judge Ron Flury again presiding.

“Providing legal services to veterans can help the homeless and those at risk of homelessness find and maintain housing,” said Jennifer LaVia, director of the FSU College of Law Veterans Clinic. “TVLC helps with driver’s license reinstatement, evictions, child support, divorce, and many other issues, including referral to a lawyer in Tallahassee or elsewhere. All veterans are eligible for services, and indigent veterans will qualify for pro bono representation.”

The TVLC operated entirely with volunteers until July 1, when it received $250,000 in legislative funding for the advice and referral clinic and the FSU Veterans Legal Clinic. 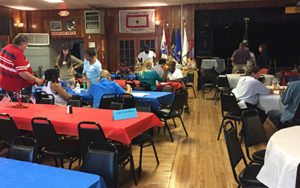 The program works to educate veterans about its resources through veterans organizations, Veterans Affairs-assisted housing locations, Veterans Treatment Court and case workers at the local VA.

McCary is now back to work as a warehouse manager and truck driver. 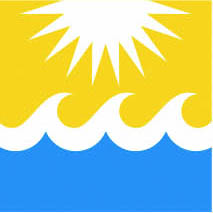