Posted on November 1, 2012 Categories: Speaking of Justice, Stories of Justice Comments are off for this post 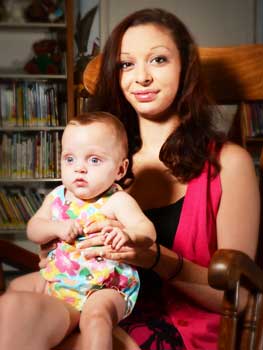 Amanda Alvarez and her daughter Liliana.

Amanda Alvarez, 18, comes across as that recent high school grad who racked up a long list of achievements.

She has the poise, diction and vocabulary of a student council president. With her long, dark hair, tasteful makeup and neat-as-a-pin pencil skirt, she has the grace and style of a homecoming queen. Out of a desire to help others, she plans to become a registered nurse. She appears so put-together, in fact, that the reality of her high school career is almost unfathomable.

It lasted all of one month before she was kicked out. And that wasn’t the first time. In spite of her 3.9 grade point average, she was expelled in the eighth grade.

“I would get suspended and then come back and ace the test,” Alvarez said. “I’ve always been intellectual.”

But it’s hard to be the all-American girl when your father is in prison and your mother is abusing drugs and getting you hooked as well. At 17, instead of picking out her prom dress, Alvarez was incarcerated and pregnant. She faced the distinct possibility of losing her baby in two ways. First, she had a high-risk pregnancy, eventually giving birth to a 1-pound, 7-ounce baby girl. Second, she was facing charges that could have resulted in her baby going into the care of the Florida Department of Children and Families.

A recent graduate of the Florida State University College of Law, Wilson developed an EJW fellowship project that provided legal advocacy for Alvarez and 71 other teenage mothers in Palm Beach County.

Now a staff attorney at the Legal Aid Society of Palm Beach County, where she did her fellowship, Wilson was able to convince the judge at Alvarez’s delinquency hearing that she should be released to a group home and given the right to visit her baby Liliana at the hospital, where she remained for almost four months.

“I could tell she wanted to be a good mother,” Wilson said.

And she has been. Besides being by Liliana’s side throughout her stay in the neonatal intensive care unit, Alvarez has done everything in her power to get her life in order and provide a stable environment for her child. She passed her GED test, scoring in the 99th percentile in spite of her almost complete lack of a high school education and without taking any GED prep courses. She has enrolled at Indian River State College and gotten a job as a hostess and server at a chain restaurant.

So impressed with her drive, a local family has taken her and Liliana in, even though at 18 Alvarez is no longer in the foster-care system. Again, it was only through Wilson’s advocacy that Alvarez was able to enroll in college and receive the Road to Independence benefits that cover college tuition for former foster youth. A parade of different caseworkers had failed to complete the paperwork necessary for Alvarez to take the GED, so Wilson got a court order requiring them to do it. The state could have tried to deny her Road to Independence benefits on a technicality related to the delay in her taking the GED, but Wilson went to bat for her at her eligibility meeting with the local DCF subcontractor to make sure that didn’t happen. 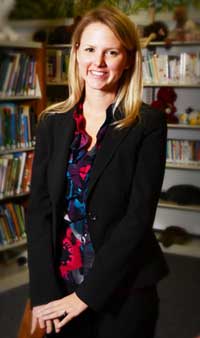 Alvarez is one of dozens of success stories that have come out of Wilson’s Legal Advocates for Minor Mothers Project (LAMMP), which had its roots in a Public Service Fellowship sponsored by a Florida Bar Foundation grant made to the FSU College of Law. Through that fellowship, Wilson interned the summer after her first year of law school at the Legal Aid Society of Palm Beach County, where she focused on girls held in detention.

“I saw that they had so much drive and potential, and if they could just be directed in a positive way, they could achieve and accomplish a great deal, not only for themselves, but also for their communities,” Wilson said.

LAMMP is an effort to light the way for teen mothers. Its goal is to break the cycle of dependency and delinquency by making sure teen mothers and babies get the services they need to remain self-sufficient. Wilson believes in teen mothers because she was raised by one.

“My mom had shown me that it was possible,” she said. “It’s possible to be a teen mom and make it happen for yourself and your family.”

Wilson points out that it is not just the mother and baby who benefit from her project. If Alvarez had been separated from Liliana, that newborn would have entered the dependency system, potentially creating 18 years or more of costs to the state, beginning the cycle anew. And for Alvarez, there is no telling what would have come next.

“Honestly I would have probably had no motivation,” she said. But with people like Wilson advocating for her, she had the support to make the right choices. “I don’t want to be a repeat in the cycle,” Alvarez said. “Of all the kids that go into foster care, there aren’t that many who end up well because of the quality of their childhood. Mine just got changed at the end. So, I got more motivation than I would have been able to conjure up on my own.”

It was while spending time with Liliana in the neonatal intensive care unit that Alvarez decided she wanted to be a nurse.

“A huge factor was seeing the kind of work they did in the NICU, being that I was there all the time,” she said. “They had such an effect on my life and Liliana’s life. I would like to have an effect like that on someone’s life. I’ve always aspired to be in that category.”

If Alvarez is one day able to change lives for the better, it will be a fitting way to give back for the way hers was changed. She just hopes other girls in her situation will get that same chance.

“There were cracks in the sidewalk for me, and legal aid filled those cracks,” she said. “If they were to take legal aid away or not support it, there wouldn’t be stories like mine.”

Besides $22,000 from The Florida Bar Foundation and $90,000 from the law firm of Greenberg Traurig for Wilson’s 2010-12 Equal Justice Works Fellowship, through which she developed LAMMP, the project received financial support from the Palm Beach County Bar Association, including its Young Lawyers division, and from the William and Helen Thomas Charitable Trust. Wilson’s work is now supported by the Children’s Services Council of Palm Beach County. She hopes the Legal Aid Society is able to go on raising funds to support her project so that she can not only continue to provide direct representation for teen mothers, but also move ahead with some coalition-building activities she has begun, including Florida’s first-ever statewide coalition for pregnant and parenting teens.

The recent decline in funding available through the state’s Interest on Trust Accounts program, The Florida Bar Foundation’s primary revenue source, worries her. Already it has forced the Foundation to suspend funding for the Public Service Fellows Program that gave Wilson her start while in law school and cut back on its funding of Equal Justice Works Fellows. And then there are the cuts to legal aid funding, which will force the layoffs of more than 100 legal aid attorneys around the state.

“It’s not for my own job that I get scared,” she said. “It’s for the impact on the clients. Any way you slice it I am still going to be a lawyer and be able to have gainful employment. But I am scared for these children that are victims practically from the day they are born.”